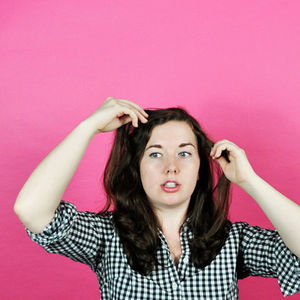 Caitlin Weigel is a Philadelphia-based performer, writer, and coach. She has coached the Philly Improv Theater House Team, Outside Voices, as well as the independent team, Bill Parks. She teaches Improv 101 and 201 at PHIT, and has taught a workshop on specifics at the Philly Improv Festival and the Albright Improv Festival. She has trained at PHIT under Mike Marbach and Kristen Schier, and is currently enrolled in classes at the Upright Citizens Brigade. She has taken workshops with Michael Delaney and Nick Gillette.

Caitlin previously performed with the PHIT House Team Asteroid! and the musical puppet show, Friends of Alcatraz. She currently performs improv with PHIT House Team, The Future, directed by Mike Marbach and the independent team, Triple Double, directed by Maggy Keegan. She also plays with the independent teams Spoon Factory and Aretha's Hat and in the monthly Dynamite Series show, Study Hall.

She is a writer and performer on the all-girl sketch team, Mani Pedi, and makes up one half of the sketch duo, House of Solitude. Mani Pedi won the 2014 Philly Comedy Award for Best Sketch Team. House of Solitude has been featured on Splitsider. You can also find her writing on Reductress, Neutrons Protons, and The Higgs Weldon.

Her coaching focuses on building detailed worlds and specific characters. She has experience with the Harold, Slacker, Monoscene, and Armando forms.

To take a closer gander and see if she's actually legit, visit caitlinsweigel.com.